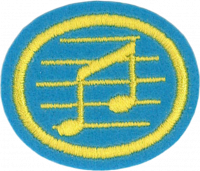 Play or sing a scale and know its composition.

Scales are an important building block of music. They are the basis of melodies and chords. Without knowing your scales, you are like a car mechanic without his tools.

What are scales? A good way to define a scale is to list the following characteristics:

These notes in the major scale form a pattern of steps between notes called whole tones, or semitones. On a piano keyboard semitones are from key to key with no keys in between, whole tones always skip a key with one key in between.

This illustration shows the difference between whole tones and semitones on a piano keyboard. 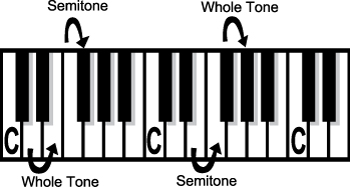 Other scales such as melodic minor, harmonic minor, pentatonic, and whole tone have different patterns of whole tones and semitones.

Write a scale in both treble and bass clef.

In order to write a scale on your own, you are going to need to study and understand a few musical terms. The following sections will help you better understand the musical theory that makes up a scale.

The word clef is used to describe the symbol at the beginning of the set of five lines on which notes are printed. This symbol tells the player what the notes are going to be within the five lines. In piano music both Treble and Bass clefs are used. Usually the pianists left hand plays the lower notes in the bass clef with his left hand, and the upper notes in the treble clef with his right hand.

This illustration shows a note called middle C. The note drawn in the bass clef is exactly the same note as the one drawn in the treble clef. 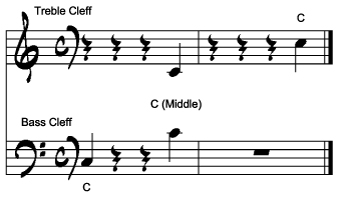 The set of five lines on which the notes are drawn is called a staff.

The notes on the treble clef have different names for the notes within the lines or on the lines of the staff than the note in the bass clef. These diagrams show the names of the notes in between and on the staff lines for both treble and bass clef.

symbol means the note is a semitone above the note name and is called sharp. The

symbol means the note is a semitone lower and is called a flat.

Notice how the black keys can each be named with two names. This is called enharmonic spelling.

Sharps and flats are notated (drawn on the staff) by placing the sharp or flat symbol in front of the note on the staff. This example shows the notes D, E, F

The note that the scale starts on is called the root note. Below you can see that the first note for the C Major Scale is the note named "C"

The word degree in music simply means a number that has been assigned to each note within a scale. In the C major scale below you can see that the scale degree of E is 3, F is 4, and so on.

Based on what you now know about scale degrees, note names, clefs, and using the whole tone / semitone patterns shown above, you should now have enough information to write a scale in both treble and bass cleff.

Know a half-tone, a whole tone, a third, a fifth, and an octave.

A half tone is the same as a half step (1/12 of an octave). It is basically the distance of two notes immediately next to each other, such as C to C# and B to C. A whole tone is the same as a whole step. It is the distance of two notes separated by another, such as C to D (C# is in between) and B to C# (C is in between). A third is an interval of three degrees (C and E). A fifth is an interval of five degrees (C and G). An octave is an interval of eight degrees--the same note eight notes higher or lower (Middle C and C).

Distinguish a march from a waltz and give the time of each.

Classical composers traditionally supplied music for dancing when required, and Schubert's waltzes were written for household dancing, without any pretense at being art music. However, Chopin's 19 waltzes (five he wrote as a child), along with his mazurkas and polonaises, were clearly not intended to be danced to. They marked the adoption of the waltz and other dance forms as serious composition genres.

Other notable contributions to the waltz genre in classical music include 16 by Brahms (originally for piano duet), and Ravel's Valses nobles et sentimentales for piano and La Valse for orchestra.

The waltz style is found in nearly every kind of European and Euro-American folk music and also in classical music. Although waltzes are often associated with the dance of the same name, not all waltzes were composed as dances: some were written for concert performance.

The waltz had once held so much importance in European music circles that great waltz composers received the honorary title of “Waltz King”. The title came with an accompanying “royal staff”, a decorated silver baton which was passed from musician to musician. Johann Strauss Junior, the most famous “Waltz King”, received the title frequently.

What is a quarter note? A half note? A whole note? Draw the symbols of each.

The names of the types of notes come from the fraction of a measure that each note gets in bar of music in four four time. In the 4/4 time signature, the top 4 indicates how many beats are in each bar of music, and the lower 4 indicates that a quarter note gets one beat. Since four quarter notes would fill the entire bar, they are called quarter notes. A half note would get two beats, or ½ of the measure, and a whole note gets 4 beats or the whole measure.

Quarter notes have a solid note head with a stem attached.

Half notes have a hollow note head with a stem attached.

Whole notes have a hollow note head, but no stem at all.

Name five great composers and one composition of each, including an oratorio, a piano composition, and a song.

Many more composers articles have been written for wikipedia.

Play with or without music or sing from memory 15 hymns (one verse or stanza each) and/or other sacred songs or choruses and list the composer of each.

Play or sing from memory one piece of good music other than those used in #7.

Do one of the following:

For instrumentalists, be able to sight-read and play a moderately difficult piece of music. Explain all signs and terms in it.

For singers, show with baton or arm how to lead a group in singing compositions written in 3/4 and 4/4 time.

Define orchestra and name at least five instruments in an orchestra.

The modern definition of the word Orchestra tends to refer to the ensemble of mixed instrumentalists playing classical music. When you think of an orchestra, you imagine seventy or eighty or more musicians dressed in black on stage. This was not always the case.

In the musical time period known as Renaissance times (1450-1600) these musical groups not only accompanied vocal music, but played supporting music for drama. Ensembles playing this music were formed from instruments as varied as the harpsichord, viol, lute, recorder, cornett, sackbut, and organ.

The orchestras seen in the Baroque period (1600-1750) began to get bigger. Previous to this, vocal music was the most important music, and instrumental music was less so. The ability of the craftsmen to build instruments had improved to the point that the finest violins ever built were made around this time.

The orchestra of this time centered around the harpsichord. A harpsichord was like the piano of today, except a mechanical pick plucked the strings like a guitar, rather than a hammer hitting the strings like a piano. Violins, violas, cellos, and bass violins provided string sounds. Woodwind instruments like recorders, flutes, bassoons, and oboes, added color to the sound. Trumpets were used in orchestras as well, but were long natural trumpets without the more modern invention of valves. The timpani was the main percussion of the period.

Orchestras of the Baroque period were small by modern standards, numbering only about twenty to thirty players.

The next musical period is called the Classical period (1750-1825). During this period the orchestra grew to include 30-40 players. The brass section grew to include horns and trombones. Woodwinds included piccolos, clarinets, and contra bassoons (bass).

The Romantic musical period (1820-1900) brought new changes to the orchestra and it's instruments. The industrial revolution allowed for technical advances in the fabrication of instruments, especially the brass section with the invention of valved instruments. This allowed composers much more freedom in the parts they could write for all the instruments.

The tuba, bass clarinet, and many percussion instruments were added. This required additional string players to make the orchestra sound balanced. In his Symphony of a Thousand, Mahler had wrote for an orchestra containing one hundred and thirty musicians so it is clear to see with what enthusiasm composers explored the limits of possibility.

A current, professional symphony orchestra usually contains about seventy or eighty instrumentalists selected to fill the four sections of a modern orchestra; Brass, Woodwind, String, and Percussion. This will vary depending on the music being performed.

Do a biographical sketch on a famous hymn writer and orally present it to a group.

Biographies of some hymn writers can be found at the following links.

Discord? What about it!
This page was last edited on 8 September 2021, at 21:07.
This is an official site of the North American Division Youth & Young Adult Ministries of the Seventh-day Adventist Church.
9705 Patuxent Woods Dr
Columbia, MD 21046