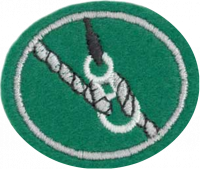 Explain the “dangers of falling” chart.

Explain the uses of the following knots:

Draw the diagrams for the setting up of the following abseil descents:

Explain the principle of belaying and the three methods used, and give the advantages and disadvantages of each method:

Explain the difference between dynamic and static rope.

Know the right type of equipment needed for abseiling.

Know the best way to store your ropes, e.g. coiling and chaining.

a. Know which descending device to use in different abseils.

b. Give reasons why you chose that device, e.g. on/off time, security, heat, versatility, etc.

Know about how to treat a patient for the following injuries:

Hypothermia is caused by continued exposure to low or rapidly falling temperatures, cold moisture, snow, or ice. Those exposed to low temperatures for extended periods may suffer ill effects, even if they are well protected by clothing, because cold affects the body systems slowly, almost without notice. As the body cools, there are several stages of progressive discomfort and disability. he first symptom is shivering, which is an attempt to generate heat by repeated contractions of surface muscles. This is followed by a feeling of listlessness, indifference, and drowsiness. Unconsciousness can follow quickly. Shock becomes evident as the victim’s eyes assume a glassy stare, respiration becomes slow and shallow, and the pulse is weak or absent. As the body temperature drops even lower, peripheral circulation decreases and the extremities become susceptible to freezing. Finally, death results as the core temperature of the body approaches 80°F (27°C). The steps for treatment of hypothermia are as follows:

An essential part of the first-aid treatment is immobilizing the injured part with splints so that the sharp ends of broken bones won’t move around and cause further damage to nerves, blood vessels, or vital organs. Splints are also used to immobilize severely injured joints or muscles and to prevent the enlargement of extensive wounds.

Before you can use a splint, you need to have a general understanding of the use of splints. In an emergency, almost any firm object or material can be used as a splint. Such things as umbrellas, canes, tent pegs, sticks, oars, paddles, spars, wire, leather, boards, pillows, heavy clothing, corrugated cardboard, and folded newspapers can be used as splints. A fractured leg may sometimes be splinted by fastening it securely to the uninjured leg. Splints, whether ready-made or improvised, must meet the following requirements:

Although splints should be applied snugly, never apply them tight enough to interfere with the circulation of the blood. When applying splints to an arm or a leg, try to leave the fingers or toes exposed. If the tips of the fingers or toes become blue or cold, you will know that the splints or bandages are too tight. You should examine a splinted part approximately every half-hour, and loosen the fastenings if circulation appears to be cut off. Remember that any injured part is likely to swell, and splints or bandages that are all right when applied may be too tight later.

To secure the limb to the splint, belts, neckerchiefs, rope, or any suitable material may be used. If possible, tie the limb at two places above and two places below the break. Leave the treatment of other types of fractures, such as jaw, ribs, and spine, to medical personnel. Never try to move a person who might have a fractured spine or neck. Moving such a person could cause permanent paralysis. Don’t attempt to reset bones.

There are two long bones in the forearm, the radius and the ulna. When both are broken, the arm usually appears to be deformed. When only one is broken, the other acts as a splint and the arm retains a more or less natural appearance. Any fracture of the forearm is likely to result in pain, tenderness, inability to use the forearm, and a kind of wobbly motion at the point of injury. If the fracture is open, a bone will show through. If the fracture is open, stop the bleeding and treat the wound. Apply a sterile dressing over the wound. Carefully straighten the forearm. (Remember that rough handling of a closed fracture may turn it into an open fracture.) Apply two well-padded splints to the forearm, one on the top and one on the bottom. Be sure that the splints are long enough to extend from the elbow to the wrist. Use bandages to hold the splints in place. Put the forearm across the chest. The palm of the hand should be turned in, with the thumb pointing upward. Support the forearm in this position by means of a wide sling and a cravat bandage (see illustration). The hand should be raised about 4 inches above the level of the elbow. Treat the victim for shock and evacuate as soon as possible. 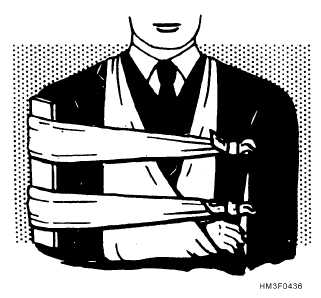 NOTE
Treatment of the fracture depends partly upon the location of the break.

If the fracture is in the upper part of the arm near the shoulder, place a pad or folded towel in the armpit, bandage the arm securely to the body, and support the forearm in a narrow sling.

If the fracture is in the middle of the upper arm, you can use one well-padded splint on the outside of the arm. The splint should extend from the shoulder to the elbow. Fasten the splinted arm firmly to the body and support the forearm in a narrow sling, as illustrated.

Another way of treating a fracture in the middle of the upper arm is to fasten two wide splints (or four narrow ones) about the arm and then support the forearm in a narrow sling. If you use a splint between the arm and the body, be very careful that it does not extend too far up into the armpit; a splint in this position can cause a dangerous compression of the blood vessels and nerves and may be extremely painful to the victim. If the fracture is at or near the elbow, the arm may be either bent or straight. No matter in what position you find the arm, DO NOT ATTEMPT TO STRAIGHTEN IT OR MOVE IT IN ANY WAY. Splint the arm as carefully as possible in the position in which you find it. This will prevent further nerve and blood vessel damage. The only exception to this is if there is no pulse on the other side of the fracture (relative to the heart), in which case gentle traction is applied and then the arm is splinted. Treat the victim for shock and get him under the care of a medical professional as soon as possible.

Carefully straighten the injured limb. Immobilize the fracture by placing a padded board under the injured limb. The board should be at least 4 inches wide and should reach from the buttock to the heel. Place extra padding under the knee and just above the heel, as shown in the illustration. Use strips of bandage to fasten the leg to the board in four places: (1) just below the knee; (2) just above the knee; (3) at the ankle; and (4) at the thigh. DO NOT COVER THE KNEE ITSELF. Swelling is likely to occur very rapidly, and any bandage or tie fastened over the knee would quickly become too tight. Treat the victim for shock and evacuate as soon as possible. 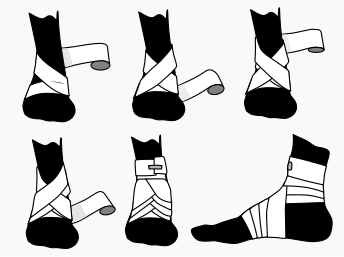 The figure-eight bandage is used for dressings of the ankle, as well as for supporting a sprain. While keeping the foot at a right angle, start a 3-inch bandage around the instep for several turns to anchor it. Carry the bandage upward over the instep and around behind the ankle, forward, and again across the instep and down under the arch, thus completing one figure-eight. Continue the figure-eight turns, overlapping one-third to one-half the width of the bandage and with an occasional turn around the ankle, until the compress is secured or until adequate support is obtained.

Explain how to perform the following rescues:

Pass the abseiling exam with a pass mark of 60%. The exam is available from the conference youth ministries office, or through the instructor.

Answer the questions on the following topics:

Uses of the six abseiling knots

What are, and give the meaning of the standard climbing calls

Give seven rules for care of rope

Give seven rules for safety

Know about first aid and how to treat patients

Give five ways to detect faults of ropes

Set up the single rope setup and canyoning setup

Witness a cliff rescue demonstrated by the instructor

Coil and chain a rope

Set up the belay methods

From a minimum height of 10 meters, complete two abseils on each of the following devices, and know how to attach them to the rope:

Explain how to do the classic abseil, and over the shoulder abseil, for emergency use.

Be able to Prusik a ten-meter cliff.

Discord? What about it!
This page was last edited on 17 September 2021, at 03:27.
This is an official site of the North American Division Youth & Young Adult Ministries of the Seventh-day Adventist Church.
9705 Patuxent Woods Dr
Columbia, MD 21046