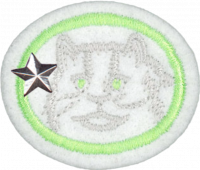 1. Have the basic Cat honor.

2. Know about cats "open-book" quiz. (This is not an instructional pass-a-test requirement, it is designed to encourage research into the world of cats.) Enjoy new discoveries as you research the following questions about some unusual domestic cat breeds from around the world.

a. The domestic cat known as Sphynx first appeared in the late 1960s. Which of the following is true about this Canadian breed?
(1) It is too wild to be a proper house cat.
(2) It is the national pet of Canada.
(3) It appears to be hairless.

b. True or False: The Chartreux, with its brilliant orange eyes and blue lips, is a breed closely associated with France.

c. Match the following cats with the special characteristics of their breed:

d. The Scottish Fold breed dates back to 1961. True or False: This cat acquired its name because it folds its body up to stay warm.

e. One breed was developed from a type of cat which once roamed the streets of Singapore. Now called the Singapura, it is also known by which one of the following names?
(1) Drain cat
(2) Fat cat
(3) Flying cat

f. The names of breeds do not always reflect their countries of origin. For example, the Nebelung (German for "creature of the mist") breed was developed in the USA. True or False: The Poodle cat was developed in Germany.

g. The English are renowned cat fanciers. Which one of the following is not a breed of domestic cat developed in the UK?
(1) Abyssinian cat
(2) Havana Brown cat
(3) Geoffroy's cat

h. Developed in the USA, the Ocicat is a wild-looking feline with spotted fur. True or False: it is illegal to keep the Ocicat as a house pet in most countries.

i. Originally called the Spotted Mist, this Australian breed's name was changed when some were born with tabby-patterned coats. What is its new name?
(1) Australian Mist
(2) Dingo cat
(3) Spotted and/or Marbled Mist

j. The Japanese Bobtail cat originated in China centuries ago. True or False: It is the only breed of domestic cat with virtually no tail.

3. Keep a cat for at least six months and do one of the following:

a. If you currently have a cat, keep a record of the care for you cat for one month. Include in your record when it is watered and fed and how often and with what supplies you care for the liter box. Why should your cat not be allowed to roam the neighborhood free?

b. If you do not currently have a cat but you owned one at sometime in the past for at least 6 months, take care of someone else's cat for at least one week. Record the care that was required and explain the relationship of house cats on the environment and why it is best they not be allowed to become feral.

c. Participate in a cat related project of your choice in support of a local humane society or similar organization.

Discord? What about it!
This page was last edited on 28 May 2021, at 00:52.
This is an official site of the North American Division Youth & Young Adult Ministries of the Seventh-day Adventist Church.
9705 Patuxent Woods Dr
Columbia, MD 21046