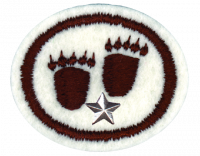 Have the Animal Tracking honor.

What is the difference between positive and negative casts of animal tracks?

Make at least one positive cast from a negative cast or rubber mold.

To make a positive cast from a negative cast, you will need a container at least the same size as the animal track. Lubricate the negative cast with petroleum jelly so that it does not stick to the positive cast. Then mix up some plaster, pour it into the container, and place the negative cast on top of the plaster. Press it in and vibrate it so that all the air pockets are removed and all the spaces filled. Leave it alone while it sets. If it was lubricated sufficiently, the casts should come apart easily after the plaster sets.

What is scatology and why is it important in the study of animals?

Scatology is the study of feces. Scatological studies allow one to determine a wide range of biological information about a creature, including its diet (and thus where it has been), healthiness, and diseases such as tapeworms. Animal feces dries, cools, and decays as it ages, so it can also tell the careful observer how long ago the animal was present. The presence (or absence) and type of insects "feasting" on scat is another important clue to when it was deposited.

Find at least one trace of an animal other than its tracks. Through careful observation and/or analysis determine as many conclusions as possible from the evidence.

Scat
As discussed in the previous requirement, scat can tell many things about an animal.
Fur, feathers, skin, and antlers
Animals sometimes leaves bits of themselves behind. Birds drop feathers when they molt, or when they are torn from them by a predator. Egg shells are kicked from nests. Animals catch their fur in trees and thorns. Snakes and other reptiles shed their skin, and deer and moose shed their antlers in the fall after the rut.
Cuttings
Cuttings are things such as acorn shells which have been nibbled on. Deer and squirrel often leave them behind.
Scratches or damage on trees
Bears, members of the cat family, and other predators will sharpen their claws on tree trunks. Sometimes they will do this to mark their territory. Beavers, natures engineers, extensively rearrange their surroundings to the benefit of other wildlife and sometimes frustration of humans.
Scent Posts
Many animals mark their territory by urinating on trees or other prominent items. If you are walking through the woods and smell a strong musky odor, look around — you may find other sign.
Carcasses
A half eaten carcass must have been eaten by something! Large predators sometimes eat their meals infrequently, so when they bring down large prey, they will gorge themselves on it to the point where their stomachs will take no more. They will sometimes hide the rest, or rest nearby while they digest what they have eaten, and then come back for more. If you find a half-eaten carcass, be careful - it's owner may be near by and will not want you to disturb it.

This requirement is a group activity requiring at least 3 (and preferably 4 or more) people. Choose a suitable large park, field, campground, or urban environment (or combination thereof). Divide the group into at least two teams. Each team should set off in a different direction to plot a course that returns to the starting point. When everyone is back, each team follows the other team's course, perhaps with the team who set the course following behind. Remember the point is to correctly guide others through a specific route, not to frustrate the other team and get them lost.

Here are a few traditional markers constructed with rocks. Note that the "turn" markers are constructed so that the smaller rock on the ground points in the direction of the trail.

Other traditional markers include broken tree branches pointed in the direction the follower is supposed to go. You can also use sticks on the ground to make arrows. Breaking tree branches may not be appropriate in some areas but if breaking the branch helps keep the trail clear it is usually acceptable.

One of the challenges of this requirement is that doing it along an established trail may be somewhat pointless. A large field might make more sense. It could also be completed in an urban area where travel in various directions is very possible but the markers can direct the correct course. On an urban course you can require that the followers provide addresses or record some feature at each turn of the route so you can verify they actually completed the correct path.

It is best if the trail is marked so that each market can be seen from the next, or at least every intersection of trails/roads/paths is clearly marked. Placing the marker a few feet beyond the intersection helps indicate the correct path more clearly.

Discord? What about it!
This page was last edited on 14 September 2021, at 19:40.
This is an official site of the North American Division Youth & Young Adult Ministries of the Seventh-day Adventist Church.
9705 Patuxent Woods Dr
Columbia, MD 21046